I’ve done it. I’ve managed to play, in succession, two games that are very similar but also complete opposites. Like Human Fall Flat, Clustertruck is a physics-based puzzle platformer with simple, flat-coloured polygons, popularised by its intrinsic GIF-ability and YouTube gaming suitability. But where Human Fall Flat was a disappointing game with fleeting moments of genius, Clustertruck is an overall joyous game with a few moments taken straight from hell – sometimes literally.

In Clustertruck, the floor is essentially lava. You have to hop across the roofs of a cascade of chaotic lorries in order to throw yourself through a goalpost, in each of the game’s 105 levels. Levels are short, taking maybe 20 seconds for a successful run, although most will require a number of replays in order to work out the lay of the land. 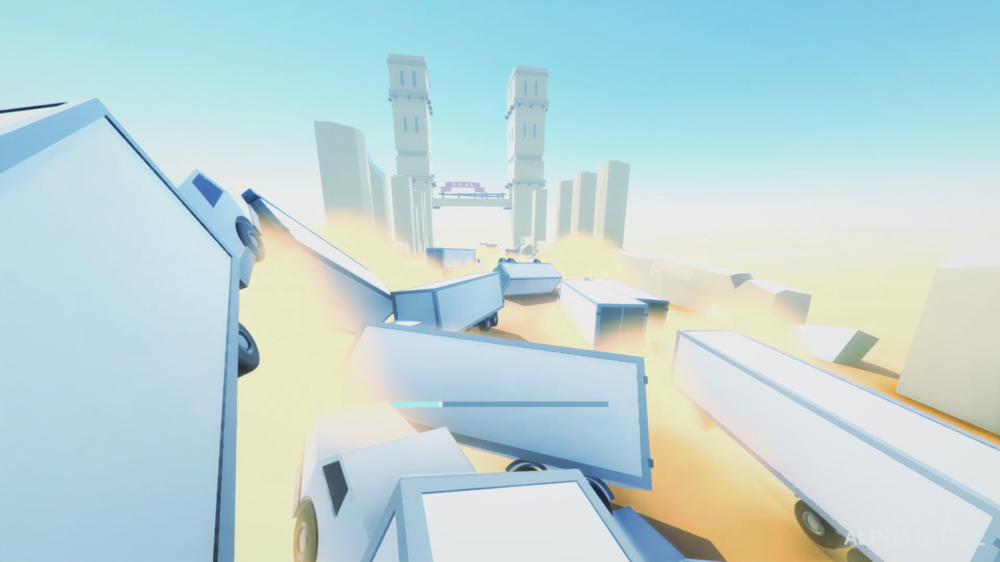 While there is a method to most levels, and you can plot out an optimal route with relative reliability, there is definitely a random element to how the trucks behave. They start off in a neat line, but quickly descend into disarray – in a different way every single time. Very rarely, this can result in levels becoming unfinishable when no trucks make it anywhere near the goal, but Clustertruck’s extremely-fast restarting of levels and short levels overall make this a non-issue – I never had a level suffer from it more than a couple of times.

On top of the basic premise, Clustertruck has a section of power-ups you can unlock. However, these seemed very odd to me – the game nudges you towards buying double jump really early on. But you can only activate one movement-based power-up at a time, and I found all seven of the other, more expensive options to be inferior to the double jump in nearly every scenario. The four miscellaneous power-ups have their own section and are more interesting – including things like slowing time down, shooting your own trucks onto the field for extra platforms, and warping everything for double points on impressive manoeuvres – but only one of these four can be active as well.

It’s also aided by how responsive the controls are – at least on PC. Player movement is extremely fluid, and even with the trucks ahead going haywire, I could generally stick landings successfully unless I went seriously wrong with a jump. The camera is a fairly big problem when playing with a controller though – being a first-person game, but also being more fast paced than the average first-person game, means that the drop in responsiveness from analogue stick control can be tough.

Speaking of problems, there are others with the console ports. For some absolutely baffling reason, jumping on Switch is permanently set to the A button – which is nowhere near the right stick. This means you cannot turn (stick), jump (A) and run (ZR) with the same hand positioning unless you’re okay with cramp of death. I’ll say it again – Clustertruck is extremely fast paced. It makes the game extremely awkward to play, and even when you work out an optimal way of doing it, it involves continuously moving your thumb between the stick and the jump button. This wouldn’t be an issue if jump was mapped to B – a button that does nothing in-game currently – but it’s irritating.

And on Switch problems, make sure you’re not stuck with Switch version 1.0.0 of the game. It has recently been patched, so I won’t be factoring this into the review, but it’s still worth noting because I spent my first week with the game like this – it didn’t work. The invert camera options were both broken in it – Invert Y did nothing and Invert X inverted both – not a problem if you play uninverted, but a huge problem for me. That’s not the worst thing in 1.0.0 though – if you got up to Level 8-4 in the game, completing OR failing it crashed the game. It was impossible to progress. 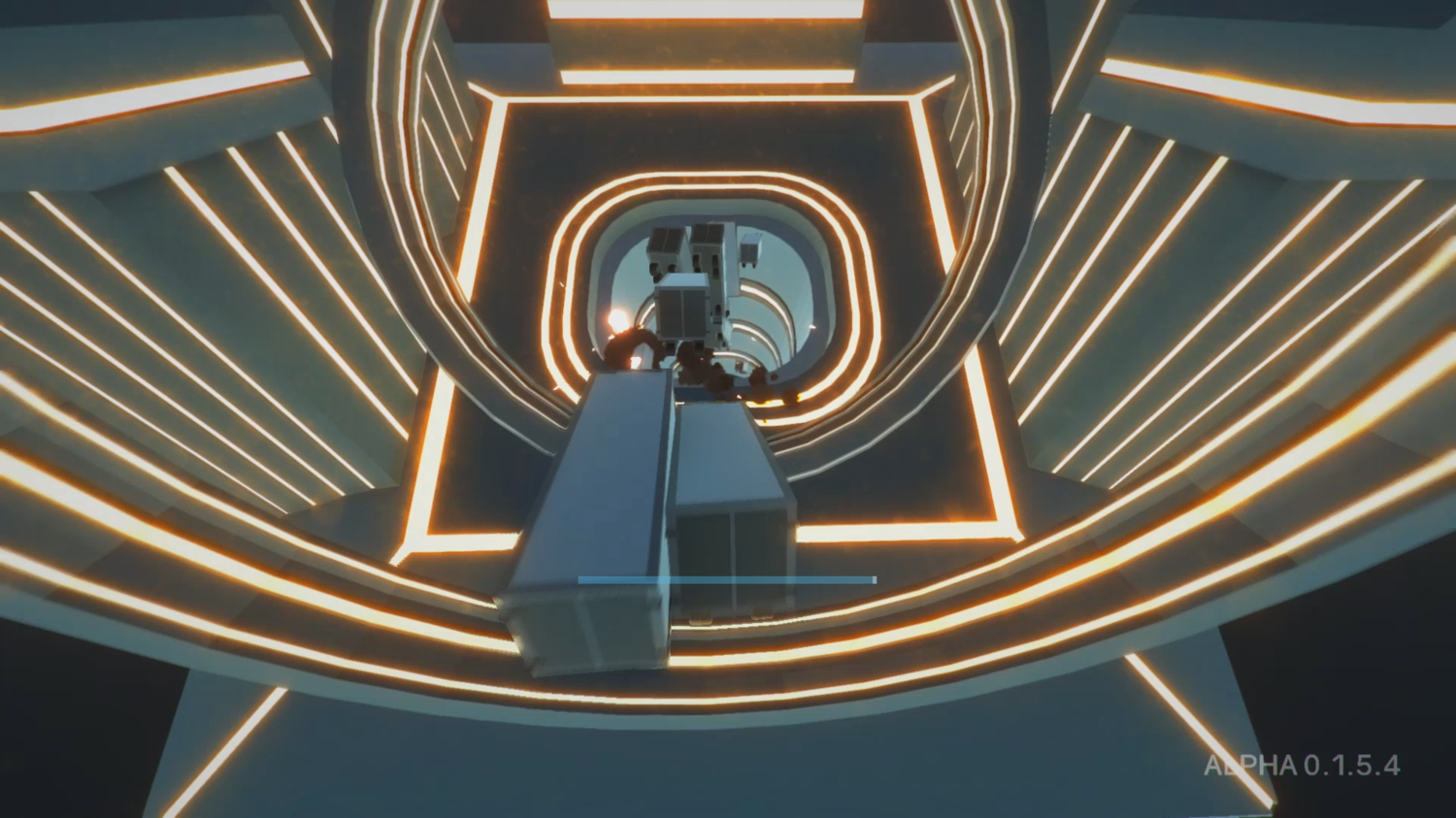 Although Clustertruck is an excellent time for maybe 95 of its 105 levels – most of it is beautifully designed and great fun to play – there are levels that hurt the experience a little. Some are too long – I found this problem most prevalent in the Steampunk world with its excessive use of difficult-to-jump pipes and difficult-to-predict gears, where especially the last couple of levels left the hardest sections to the very end and were difficult to assess. Some suffer particularly heavily from the random element making bits impossible. Some require too much turning – at least where playing with a controller is concerned, the levels that don’t require 90 or 180 degree turns are orders of magnitude more enjoyable, but thankfully the turning ones are few and far between.

But the worst level in the game is the final boss. Presumably taking inspiration from older platforming games, the boss has three phases you must get through, each one of which is over a minute long, extremely repetitive, increasingly difficult, and increasingly easy to mess up – especially when one single tiny error immediately kills you and forces you to go through the whole thing again. It’s several minutes of hell (fittingly, against the Devil in the Hell world) as a foul and unfitting finale to a game that, for 89 levels prior, featured shorter, more fun levels.

Still, you don’t have to beat it to play through the 15 extra levels, 10 themed on Hallowe’en and 5 on Christmas, many of which feature extra unique mechanics and all of which are a return to form and a superb palette cleanser.

I would absolutely recommend Clustertruck. It has its fair share of problems, but is almost entirely great fun. It could really do with something like an endless highscore-chasing mode that was less caring about skill and more just capitalising on the existing, hilarious backbone of the game, but as it stands, the levels are fun to work through and fun to revisit too, to faster and more furious strategies and paths and seeing how outrageously you can get through them.

But if you can, pick it up for PC and play it with a mouse.