Before I had a broadband internet connection or the disposable income to buy games, I often got fun out of free game/demo discs that came with magazines. I still have a collection of these – mostly for PS1, PS2 and PC. And it’s with the latter – free discs from PC magazines – that I got my first taste of the indie gaming scene.

They often contained full, free or generous shareware indie games alongside demos of AAA games, and were generally what I spent the most time with out of everything. I learnt about many developers and even full genres that remain relevant today, such as the bridge builder (with Pontifex 2). Some of the most fun I had was with Porrasturvat: Stair Dismount – a game in which you pushed a faceless, featureless white man down a flight of stairs. He tumbled, he twisted, and as a teenager, it was hilarious.

Human Fall Flat reminded me of Porrasturvat the instant I saw it. Wobbly ragdoll physics on a featureless white person, in areas largely lacking detail beyond basic colours – I did my usual trick, looking no further into the game and buying it there and then. And here are my thoughts, now I’ve completed it.

I wanted to love Human Fall Flat. I really did. It took me right back to the age of peeling the disc off of the front of PC Gamer et al, and installing all the demos, terrible trial software and indie games off it with no regard for my computer’s ability to run or store them. But it just never gelled with me.

Human Fall Flat is a puzzle platformer that is entirely built around its physics engine – and there is its first problem. Its physics engine – or at least how the game uses it, as I’m guessing most of it is stock Unity – is exceptionally hit and miss.

At times, the physics work wonderfully. Clambering up a ledge that you’re dangling off was reliable (despite feeling unreliable). And many of its puzzles used the mechanics well – stand out examples included having to fill a dump truck with coal to fuel a series of furnaces, using a cane to swing across a chasm with only a single outward pole as assistance, and hooking the side of a dam to a cable car so, as it departed, it destroyed it and caused a waterfall. 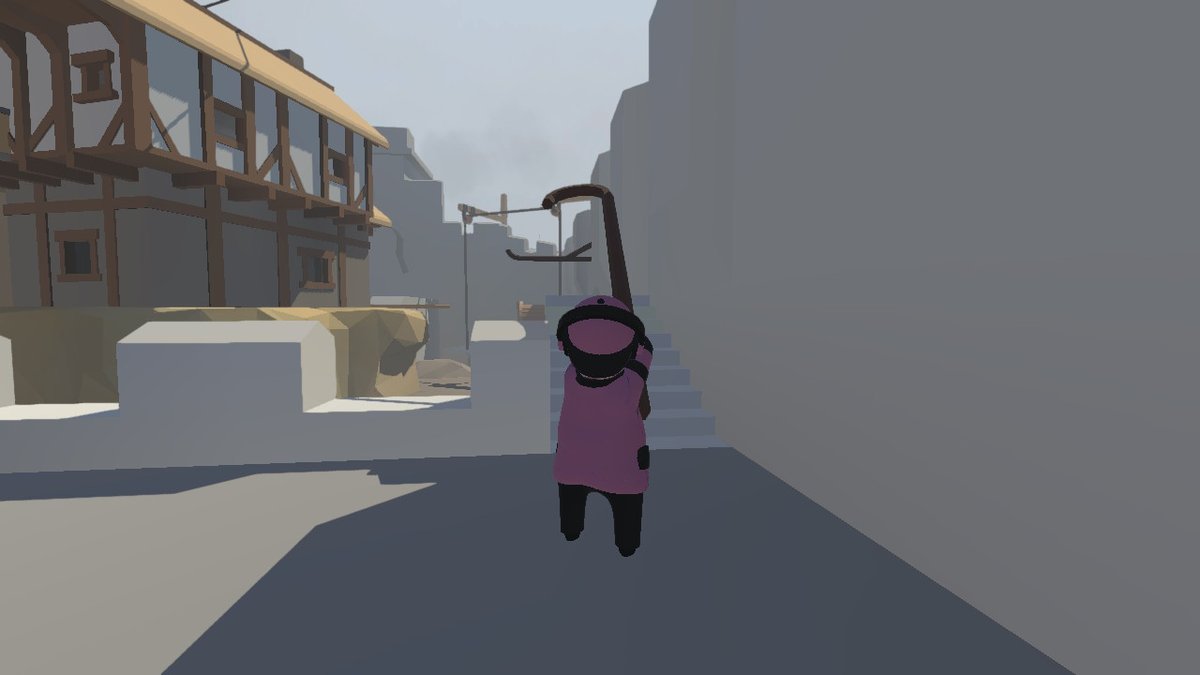 But then there are plenty of bad aspects to it. Objects will occasionally get stuck inside each other, or misbehave when you’re trying to perform something precise. Worst of all, player movement is generally rough – walking is sluggish and constantly feels like you’re about to fall over yourself, and I often found the little bloke’s arm would get twisted around behind his back, forcing me to make him writhe around in what I can only assume to be some fairly intense pain to free it. And some other puzzles and mechanics in the game are unforgiving or tedious due to the physics – two sections in which you have to row boats, and perform quick jumps over a collapsing bridge while avoiding swinging obstacles, were puzzling lowlights.

Perhaps the most fun I got out of the game’s physics were learning “unadvertised” things. The game gives you the knowledge to walk, jump, grab things, and pull yourself up ledges, and that’s it. After a lot of trial and error, though, I taught myself how to traverse walls in any direction – including straight upwards. While this was nice, all it really amounted to was being able to skip single puzzles or entire chunks of level – I resisted the temptation to do the latter, wanting to make the most out of the game, but I took advantage of the former any time I got bored of trying to complete more obnoxious puzzles. 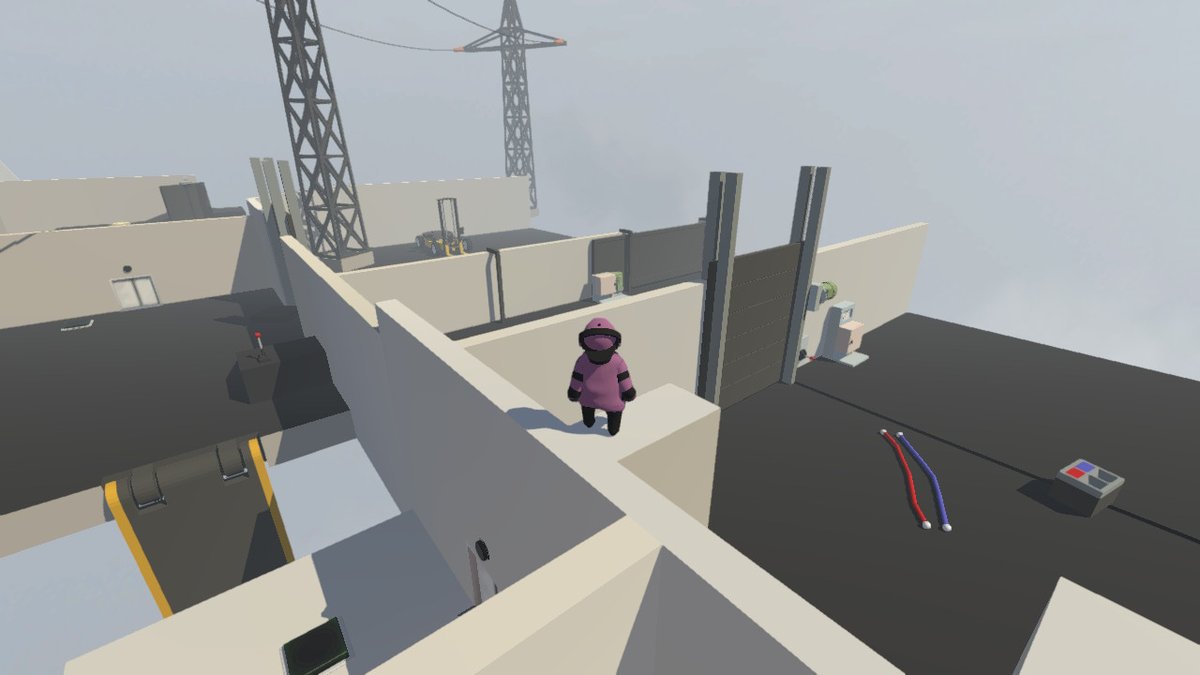 Human Fall Flat could have made up for the worse puzzles by being fun to explore, but it wasn’t. To begin with, the game had “Portal intrigue” – that feeling that everything going on was leading up to something significant. That feeling that, at some point, there was going to be a massive plot twist and turn the game from a mediocre puzzle platformer to a memorable experience. And it never happened. After a few short levels, the little tutorial packages that could have been Human Fall Flat’s “GLaDoS” dried up. Beside the odd sound bite that triggered when you did specific, quirky actions, you were on your own for the remainder of the game. And before you know it, you complete a level near identical to every level before it, only to be abruptly greeted by a credits sequence. No fanfare, no explanation – that was the end of the game, good job, go away now.

As far as I could discern, there is nothing to find in Human Fall Flat. Levels generally had a clear “way” to go, although it did at times promote taking different paths. But any time I stumbled across something off the beaten track, it lead to just another minor disappointment. One example in a level sees you find a hidden cave system. In it, there are these mysterious fluorescent green cubes. And they do absolutely nothing, the cave’s a dead end, oh well that’s it. The game’s full of that.

The heartbreaking thing is how close Human Fall Flat is to pulling that kind of thing off. It’s got the worlds, it’s got the engine – but it squanders it constantly. It just needed a twist end, or stuff to actually find, or any reason to explore a little. Something. Anything. All you currently have is a lifeless, colourless, personality-bereft series of levels that you haphazardly wobble through. There are fleeting moments of satisfaction when a well-executed puzzle goes well, but those moments are sadly few. And in a game that costs £15 for a few hours of content that are largely unsatisfying, I finished it feeling short-changed too.

I can only honestly recommend Human Fall Flat in two situations. If it’s on sale for a few quid and you have someone to play 2P co-op with you for a bit of a giggle, then sure, knock yourself out. And if you happen to be a YouTube video creator or Twitch streamer with a rabid fanbase of pre-teenagers, this would be a good game to cover. Go on, overreact loudly every time something weird occurs – they’ll eat it up.

If you fall into neither category, just get Porrasturvat: Stair Dismount for free. 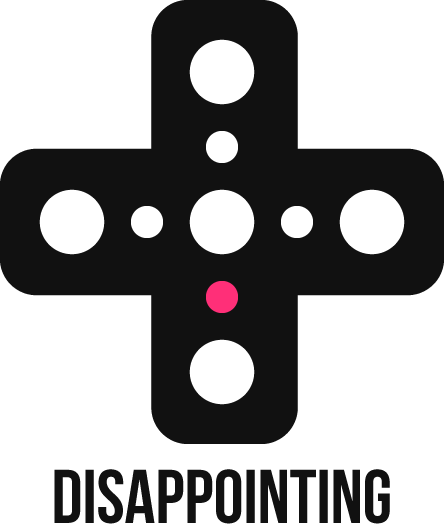