(For the purposes of this review, I will be referring to the game and its character as “Tombi” – in non-PAL regions, note that their name is Tomba.)

For all the good the internet age has done, I do occasionally find myself nostalgic for aspects of the past. Demo discs are a good example. When I was young and every pound I owned was precious, I always had three choices on my hands for expanding my PlayStation library – spend £29.99 on a new game, a middling amount on a second-hand one, or £4.99 on an Official PlayStation Magazine issue that came with a bunch of demos on its free disc. The latter two options were what I steered towards, using the demos to guide me towards games to buy second hand. But that came with a problem – a lot of the time, the games that the demos showed off were rare. Even then.

The list of games that I had to wait until years later to buy due to their rarity is quite long: Kingsley’s Adventure, Kula World, Vib Ribbon, Ape Escape, Destrega, Amplitude, Gitaroo Man… and of course Tombi!. Tombi! was the hardest to find and most expensive of these games – but was also the one which’s demo captivated me the most. It was really long, giving you the first hour or so of the game – and I’ve played that demo so many times, that the first visit to Mushroom Forest in the full version of the game, right after the demo ended, is still mildly jarring to me.

So how is Tombi!, as we fast approach its 20th anniversary of its UK release (August 28th 2018), as a modern experience?

It’s pretty excellent. Apart from in the resolution department naturally, nothing about Tombi! has aged particularly badly. It still plays as smoothly as it ever did, it’s got a rather pretty art style (actually trumping its sequel, Tombi! 2, in some regards – more of that game is rendered in blocky PS1-era 3D, where the original’s details are all 2D sprites), and it’s a fun experience from head to toe.

You play as Tombi, a pink-haired little caveman-esque creature, who goes to a weird land in search of his grandpa’s bracelet. It’s been stolen by a rabble of evil pigs (I hate when that happens). Naturally, it’s up to Tombi to put all the evil pigs into little colour-coordinated bags so he can return home. And yes, that’s the plot. It’s a silly plot, but really it’s just to push things along.

The game itself is a really unique mix of ideas, that I’ve never seen done to any similar degree in a game since. At its core, Tombi is a 2D platformer with the occasional ability to switch depth level or turn corners. You start off with the Blackjack, a chain-linked melee weapon that can be swung around or thrown in your eight cardinal directions (it controls like the whip in Castlevania) – but that’s not the fun way to kill things. You can also jump on enemies’ backs, at which point Tombi will grab hold of them, ride them, then at your convenience you can jump again and launch them any direction you like. It all controls beautifully.

But wait, there’s more! Tombi! incorporates an RPG structure as well. On top of main quests which lead you through the story, there is a smorgasbord of side quests to play and enjoy. You can find and equip new weapons, tools, items, power ups, all manner of things. And the game will often also switch out of the side-on platforming perspective into more of an almost isometric view as you enter settlements, allowing the prioritising of talking to NPCs.

The game is consistently interesting – and at times, inconsistent. Tombi’s frequent perspective switchups have a couple of issues. Initially, it’s difficult to grasp where things are located. The game is open-ended, and new doors will often lead you back to old places. But they often do so in ways that seem nonsensical geographically, and to efficiently move around the game’s world requires a little memorisation of which entrances lead where. Well, at least unless you have Baron the dog or some Charity Wings available, both which allow fast travel.

Bigger complaints from me are that a few parts of the game let it down. Haunted Mansion, a total misnomer because it’s more just a hill full of individual outside-accessible rooms, is a 2.5D level that desperately wants to be 3D. It’s laid out in 3D but you’re still locked to flat planes, requiring awkward jumps, climbs and turns that are often unclear, and remembering which rooms lead where if you ever have to backtrack there for a sidequest. 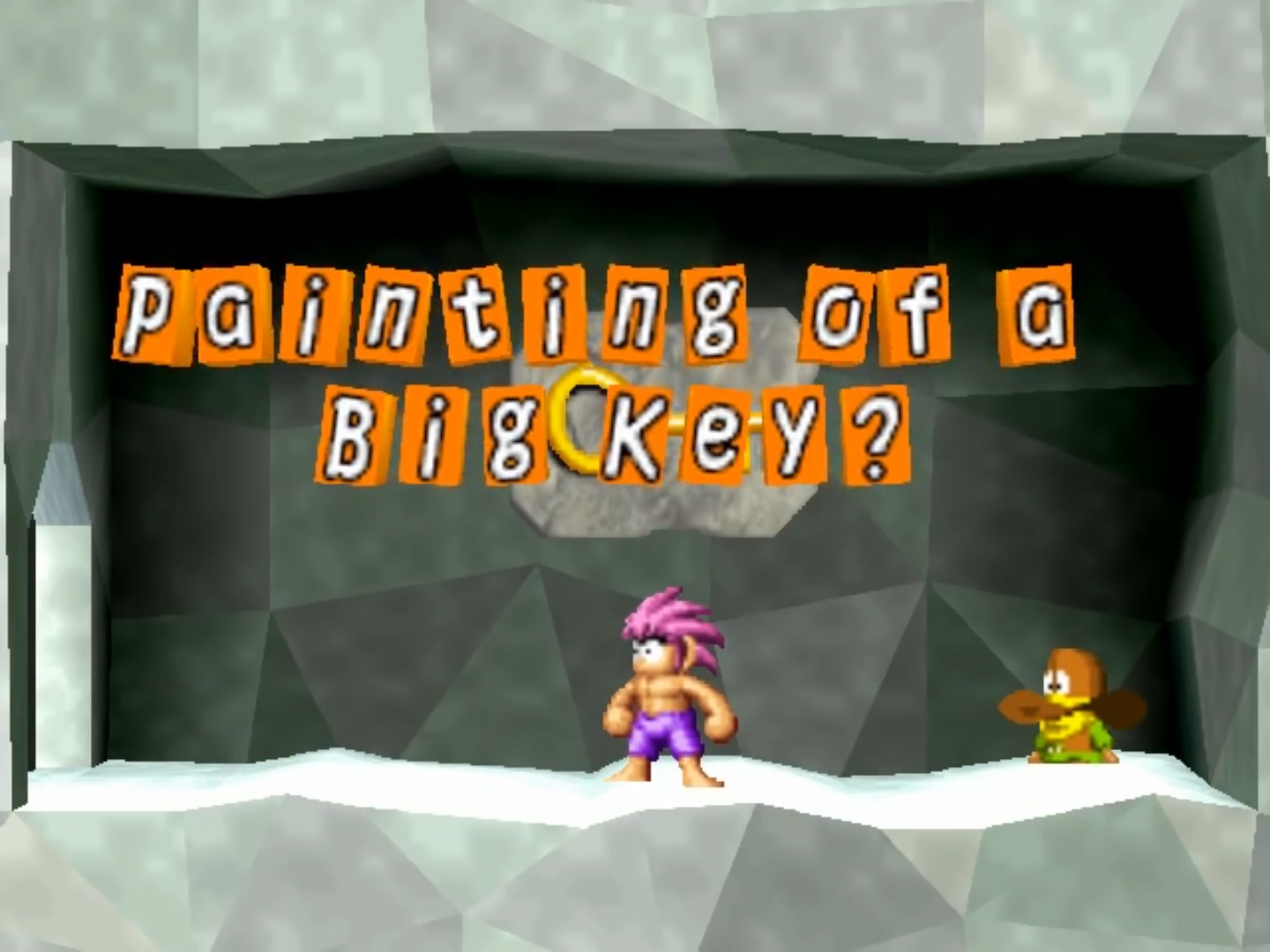 Phoenix Mountain is another major one. I got to it straight after receiving the Parasol, a great item that greatly reduces Tombi’s falling speed, then had to unequip it. Phoenix Mountain is windy. It’s a pain to control in, hellish to finish initially, and the pig bag that you need to break the evil pig’s curse on it and stop the wind is a very tight jump to make – again, while the game is throwing your balance off with wind.

Speaking of the evil pigs, the boss battles are pretty unnoteworthy as well. Each one has their own level, attacking style and hurdles to overcome, but they can all be defeated in the same way – jumping on their heads and throwing them into the evil pig bag that is rotating or moving around the level. Timed correctly, you can defeat every single one of them before they ever get an attack in – because they’re all vulnerable to being jumped on the moment they start trying to. Even the final boss is defeated in the exact same way. No hidden second healthbar, no breaking out of the bag once or twice before finally succumbing – I never even saw his attacks, because by the time I got to him, I’d had his 7 predecessors to practice my pig-launching aim.

One last annoying section of the game for me was obtaining the Gold Medal on the “Motocross” portion of the game. I can’t stand it when an excellent game (PS1 platformers are ridiculously guilty of this) has a difficulty spike in a minigame that is completely different to the rest of the game’s mechanics, and this is one of those moments. You jump on the back of an inflatable vehicle and have to complete one course in a very tight time limit. It’s presented like it would play in a Trials kind of way, but its physics are nonsensical and its level design is unclear. It’s the worst part of Tombi! by far – although it’s optional. And if you look up solutions to it, you discover that you can easily get Gold on it by not touching anything for the first two thirds of the entire level then simply jumping three times in succession.

Those gripes are small parts of what is overall an immense gaming package. Tombi! is a wonderful game to play, with a great sequel as well, from the same person who made MadWorld on Wii, another of my favourite “there’s nothing like it!” games. 20 years on, the game is as playable and fun as it ever was, with only minor setbacks. The only reason I didn’t 100% it for the first time was because one of the quests, which involves pushing a barrel into a body of water, can be permanently locked off if you break the barrel. It doesn’t even tell you that’s a thing. (I’m not bitter.)

My recommendation of Tombi! would be unconditional, but there’s a stumbling block. I started this review talking about the internet age – eBay is another product of that. Due to the scarcity and desirability of Tombi!, copies nowadays can sell for as much as £300. You can buy it digitally for a fraction of that on PS3 and PS Vita (where it’s called Tomba! even in PAL territories, for some reason), but my PS1 copy of the game will always be the crown on my game collection. I love Tombi!, and it makes me genuinely sad that we’ll likely never see its like again.