“Newspaper” puzzles are some of my favourite ways to spend some time not doing a lot. Ever since sudoku puzzles exploded, they brought with them numerous other things that went from obscurity to popularity. Killer sudoku, kakuro, battleships, and so many others with so many different names.

Perhaps the best of the bunch, however, is the mighty Picross. I first heard about these when my mum gave me a book of them (which it called Hanjie puzzles), and later found their newspaper to contain the same thing under the name “Nonogram”. “Picross” seems to be the prevalent name for them now, though.

Picross puzzles involve you (at their most basic) filling in a white grid with black squares to form a small picture. You are given hints to which squares must be filled by a series of numbers for each row and column – these indicate “blocks” of squares – so a column with a “2 3”, from top to bottom, will anywhere within it, have 2 filled in squares next to each other, then at least one space, then 3 more. You can determine cells that HAVE to be filled, for example, if a column of 15 cells has just a 10 – it means the middle 5 must be filled no matter what, as the highest and lowest locations of the line of 10 overlap in that area.

If you like the idea of puzzles like that but don’t quite get what I’m saying. Picross S eases you into the concept of the game with a nicely worded tutorial, and a number of very basic puzzles just 5×5 in length that are relatively foolproof.

At its core, Picross S is just a vanilla Picross game. The main mode sees you working through a decent collection of puzzles of increasing difficulty. Apart from one or two outliers, which seemed impossible without trial and error (here’s to you, Pinecones), every puzzle was doable and fun without causing too much of a roadblock.

The game also controls fluently, allowing you to quickly get into it and fill in puzzles far faster than you would with a printed copy. It certainly trumps Switch’s other Picross game, Pic-a-Pix Deluxe, in that regard, although that game does have the common Picross variant, Multicolour Picross, to deal with – all puzzles in Picross S are monocolour.

However, Picross S does have a curveball – “Mega Picross”. Despite the name, they’re not big puzzles – they just have a weird mechanic I’ve never seen in any other Picross implementation, where some rows and columns are paired up and share a block indicator. They act kind of obtusely – they will indicate areas where connected areas of blocks are in both rows/columns at once or only in one, as well as indicating a rough order of them.

It takes a lot of getting used to – it took me a couple of hours to not keep messing them up – but it’s a really good idea and a fun addition to the Picross formula. 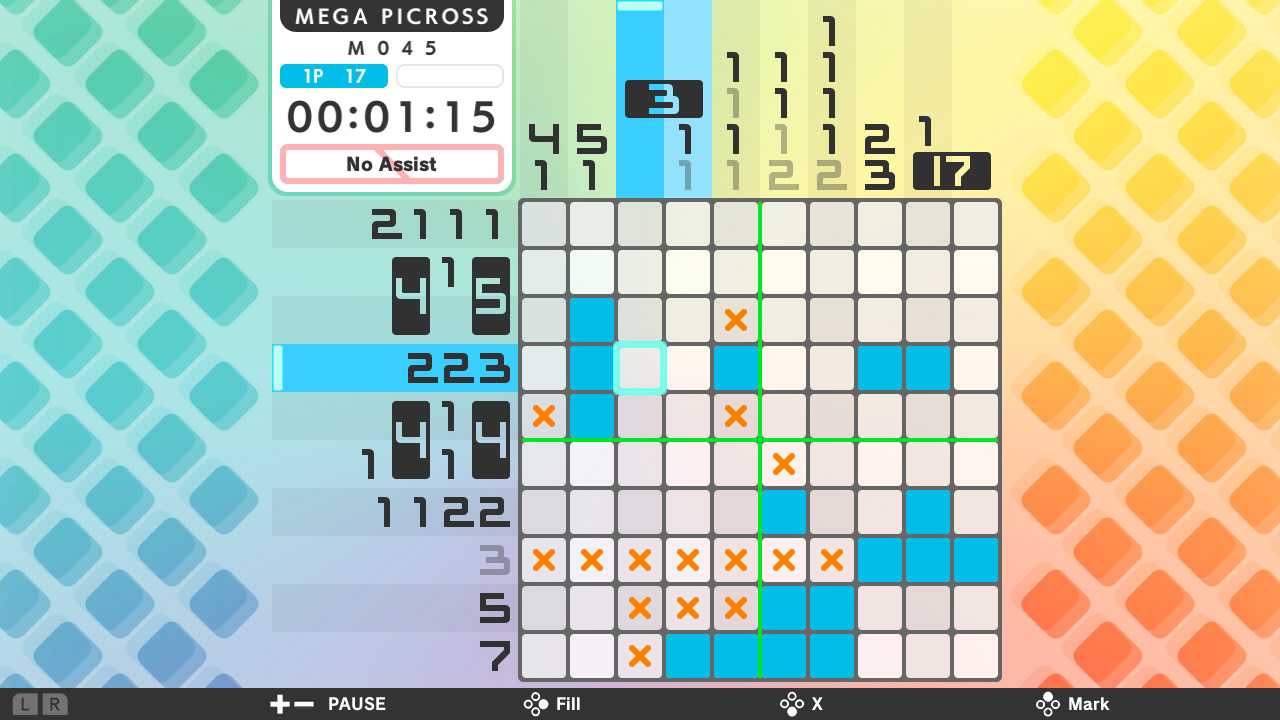 The game also contains a multiplayer mode, which I’ve yet to be able to try.

If I have any complaints with Picross S, it’s mostly that there aren’t more puzzles available. It’s inexpensive, but I’ve now completed every puzzle with no assistance, and unlike things like Sudoku puzzles, Picross puzzles are memorable thanks to the pictures their finished states contain – so there really isn’t much replayability here. It also feels like a game that could make good use of the Switch’s touch screen, but it has zero support for it.

If you like Picross puzzles, though, this is far from a bad way of burning off a few excess hours of time.