It’s been four years since Professor Layton last popped up, in the excellent 2013 game “Professor Layton and the Azran Legacy”. Four long years I’ve had to wait for a new fix of puzzling goodness to sate my appetite.

As is probably obvious, I love the Layton series. The first two reinvigorated the Nintendo DS for me after I fell disinterested in it for five years or so. Every instalment from then on has tag teamed with Pokémon to be my main interests in Nintendo’s consoles. I remember getting IDed for the third one despite it being a 7+. I remember going into GAME for the fourth one on day of release. I remember just ordering 5 and 6 online to save time, taking my 3DS into work both times so I could get started on my annual fix at lunchtime instead of having to wait until after work.

And now, after four years – and several months because I wanted it on 3DS rather than iOS or Android, despite those versions being functionally identical – it’s here. And 170 puzzles, 27 gameplay hours over a week, every hint coin and collectable and every minigame later, here are my thoughts on it.

Although Layton’s Mystery Journey: Katrielle and the Millionaires’ Conspiracy (which I will avoid naming fully for the rest of the review due to its clunkiness) is perhaps the biggest departure to the main Layton series formula yet, it’s also very much still a Layton game. You go around, progressing the story in a universe where puzzles are everything, solving them along the way. Someone needs to prove your worth? Puzzle. Door needs unlocking? Puzzle. Tried poking that bin? Ooh, that’s a hidden puzzle.

The game’s control scheme is nearly identical to the previous 3DS instalments (albeit without any use of the system’s titular 3D – a little disappointing, as this is the first one I’ve played on a New Nintendo 3DS with the superior 3D. Pokémon Sun and Moon did that too!). You can also find hint coins by poking around locations, now with added 10-coin super-hidden spots, collectables by poking at “dusty” spots, etc. Also intact is the thrill of poking someone or something and the satisfying red exclamation mark pinging up – it’s puzzle time!

There are 170 “main” puzzles in LMJ, along with numerous extras unlocked in various ways. It’s here that I find myself disappointed in the game, sadly. Many of the Layton games overuse one particular concept – I remember specifically that one of them had way too many sliding puzzles and another had too many of the “four people say a thing, one is lying” puzzle. LMJ does this too. However, LMJ’s overused concept is in basic, boring lateral-thinking one-shot questions that don’t make you feel smart for working out – they just make you feel cheated if you miss what the puzzle has decided is the optimal solution.

There’s also a much bigger tendency for puzzles in this instalment to be poorly or ambiguously worded, leading to incorrect guesses. One that sticks in my mind is a puzzle asking you for a date that the speaker is saying something, and the gimmick is that he starts the sentence on 31st December and ends it on 1st January, the only way his sentence can be true. Except that the puzzle makes no actual mention of which date you need to input. I managed to fail this twice – 1/1 was wrong, and then when I went for the earlier date, I put the month in the day column and vice versa. (Why is the game using MM/DD in a game set in bloody London?!) This is far from the only example of this sort of ambiguity.

It really took the wind out of the game. Despite it having, and proudly touting, more puzzles than any prior instalment of Layton, the interactivity was at an all-time low and most puzzles were completable in about 10 seconds flat when blindingly obvious tricks jumped out the second you worked out what the question was trying to actually ask, or some other flaw in them made the solution easy. An example of this: TWO different puzzles asked for a sport, and then only gave you four characters to input. My working out for both: check if it’s “GOLF”, yes it is, done.

Even though, for me, the puzzles are everything, the Layton games are a rare case where I enjoy the stories as well. I have fond memories of how all six of the prior games ended, and finding out the major plot points in each one. (Although, Curious Village, your plot twist was just annoying. Bones to you.) LMJ switches up the single focal story formula by instead giving you an overarching goal – finding Professor Layton, Katrielle’s father – but really going through self-contained stories in the form of detective case files as the bulk of the game.

This was a double edged sword for me. It drained the game of any real grandeur that the older games had, with the only major plot event occurring at the end of the final case and in the post-game cutscene. But it was also really nice to hop between smaller stories, with their own mini-twists. I found it quite fun to see where things were going and work out how early into each case I could accurately predict its solution. Not sure why every single case had exactly 6 key “eureka” moments though – with how they formatted the game, some could easily have been fewer or more.

Of course, the other big thing here is the new cast. Losing Professor Layton, Luke and Emmy, we now have a new protagonist – Katrielle Layton – as well as her servant Ernest and her dog. And here’s another mixed bag. Katrielle is an excellent character, with small shades of her father’s tendencies mixed in with an incredible amount of expressiveness (something the Professor lacked). 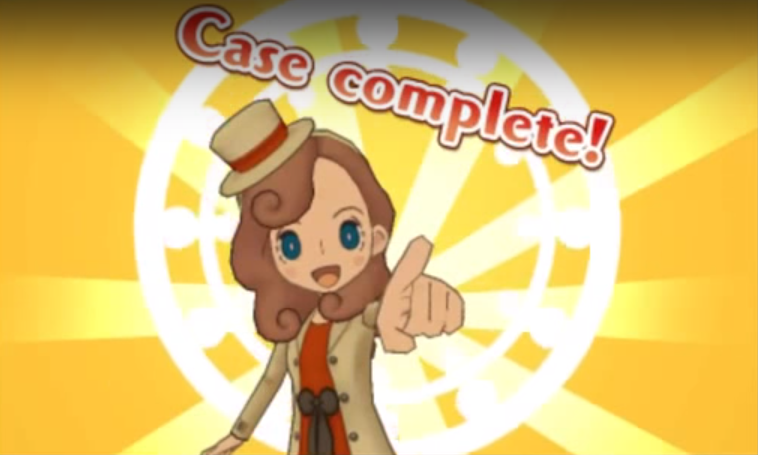 Ernest Greeves is fairly dull though. Apart from a very cute animation when he’s nervous, where he wiggles his hand around like he’s frantically operating an invisible touch screen, he just trails around Katrielle occasionally getting a bit “oh look i’m falling in love a little” – something she does not reciprocate – and at least until the last few cases is barely more than a commentary point. But he’s not the worst person in Layton’s party. Let’s talk about the dog.

Early on, you meet the dog, and right from the start, it’s obvious we’re dealing with more of a Scrappy Doo than a Lassie. His name is, and I’m glad I’m only typing this because saying it out loud causes me to involuntarily bring up bile, “Sherl O.C. Kholmes”. If that isn’t vile enough, he talks, he’s sassy, he has the worst British accent in the world (thankfully, as this is a Layton game, most dialogue isn’t voiced), and just to put the cherry bomb on the asbestos pie, sometimes if he solves a puzzle he sings Elvis Presley’s “Hound Dog” while standing on his hind legs and doing an Elvis face. I’ve never wanted a fictional detective case to involve someone running a dog over more in my life.

That’s a lot of negative stuff, but there are plenty of positives. The biggest thing I love with LMJ, other than how good a character Katrielle is, is that you can backtrack. In previous games, you could miss puzzles (which would then get relocated to Granny Riddleton for later completion). And any puzzles you didn’t miss, you would only know about if you looked through your puzzle list and found the missing numbers. No more! Now, once a case is completed, you can go back into it, and the game will highlight individual areas that you’ve missed puzzles, and coins, in. It’s such a tiny thing, but it’s crazy that it took them until the seventh instalment to add it. This is also probably the funniest Layton game to date, with a lot of little jokes and references that work surprisingly well.

And of course, like with previous versions, the game has lots of little minigames to collect and complete, bonus features, and gets a new puzzle a day for a year, so I will be going back to it and clearing those up as well as I did with the others.

So even though this was perhaps the weakest Layton game in several ways, it’s still very much a Layton game, and I enjoyed my time with it (continuing to do so throughout the year with the daily puzzles too). If the next instalment is able to take what is established in Millionaires’ Conspiracy and improve puzzle quality and variety (even if it knocks 50 off the total), and perhaps permanently muzzles the dog, it could easily become the series’ finest hour.