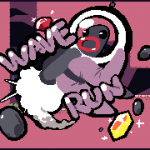 This week’s Friday Itch is Wave Run by Jamie Rollo. Originally created for the Global Game Jam, Wave Run is a twitchy platformer that will drive even the most skilled of gamers into fits of anger. As someone who is not a skilled gamer, I’m obviously seething.

The basic idea of the game is simple: take control of the purple astronaut and blast as fast as you can through fields of obstacles. In practice, this is harder than it sounds, but anyone who’s spent a significant amount of time playing Super Meat Boy will be well equipped to handle the action.

The graphics are simple but pretty, and the game is perfectly GIF-able (if that’s even a word). Overall it feels like the game is designed to be perfect for outrageous let’s plays and live streams, or quick entertainment for office workers looking for something competitive to do on their lunch break. Just don’t rage out and cause a scene if you get pierced by the same spike for the fifteenth time.